Kanye Omari West is an American rapper, singer, songwriter, record producer, fashion designer, and entrepreneur. Over the years he has been seen as fan of trump to some extent. He always kept it on a level but this time we went off the board. 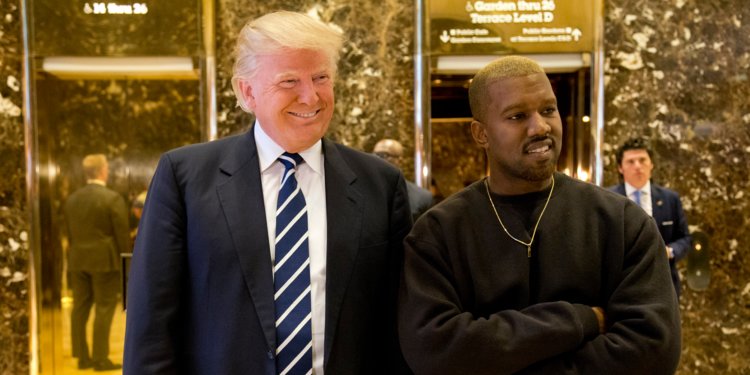 “You don’t have to agree with trump but the mob can’t make me not love him,” West tweeted earlier Wednesday. “We are both dragon energy. He is my brother. I love everyone. I don’t agree with everything anyone does. That’s what makes us individuals. And we have the right to independent thought.

After the whole situation got out of hand. It seems the Kardashian wanted to step in to make every know that they are holding Kanye down.

Kim Kardashian West couldn’t help but get involved. Most people know Kim as a critic of Trump. Now Kim comes out to say that clarified that he doesn’t agree with everything Trump does.

Kanye’s new series of tweets have pretty much everyone scratching their heads, including Kanye’s wife Kim Kardashian West, who apparently called her husband to get clarity on his “love” for Trump.

The 37-year-old jumped to her husband’s defence after he was criticised for pro-Trump messages including calling the US president his “brother”.

“To the media trying to demonize my husband let me just say this,” she tweeted.

“Your commentary on Kanye being erratic and his tweets being disturbing is actually scary.”

Seems the damage control was not enough Kanye began to tweet a lot of times just to make sure the black community is okay.

If your friend jumps off the bridge you don’t have to do the same. Ye being Ye is a fight for you to be you. For people In my life the idea of Trump is pretty much a 50 50 split but I don’t tell a Hillary supporter not to support Hillary
I love Hillary too.

That rumor is false.

Symptoms and Precautions to take concerning the Coronavirus

Meet The Guys Making Your girlfriends wanna cheat on you; Kupe...

FULL VIDEO AFIA SCHWARZENEGGER CAUGHT IN BED WITH ANOTHER MAN.