It was a really poor miss but Buffon deserves a lot of credit. Mauricio Pochettino side saw many opportunities that they could have won the game in a massive comeback.

Kane, who scored with a fantastic header in the north London derby on Saturday, was just a couple of yards out but couldn’t beat Gianluigi Buffon with his effort. The Italian legend stayed strong and palmed out Kane’s header brilliantly.

The match started on a bad note for the Spurs. As they went 2-0 down after just nine minutes inside the Juventus Stadium. Juventus have not lost in Europe to any team at home for about 38 matches. So this was not a match they were gonna lose.

According to GIVEMESPORT Dele Alli’s lack of concentration saw Higuain create yards of space for himself from a free-kick before the Argentinian swiveled and volleyed in brilliantly. Seven minutes later, Higuain had grabbed his second.

In the 34-minute, Harry Kane onrushing ‘keeper and finished calmly to get his side an all-important away goal. Then came Cristian Eriksen produced a moment of magic to pick out Harry Kane with a lovely cross. 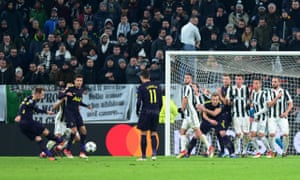 HIGHLIGHTS OF THE GAME