The wedding played out like a movie. During a group photo with the flight attendants, the Pope asked the couple after a short conversation to sit down.  The airplane was ferrying the Pope from Santiago to the city of Iquique.

The couple who in 2010 planned to marry in church, had the tsunami destroy the church and couldn’t marry. Little did they know such a great opportunity will happen.

Imagine spending 0 dollars to have your airplane 36000 feet high in the sky and the POPE to bless your wedding. Also, there were many photographers and about 73 international journalists who were on board the plane captured the event. 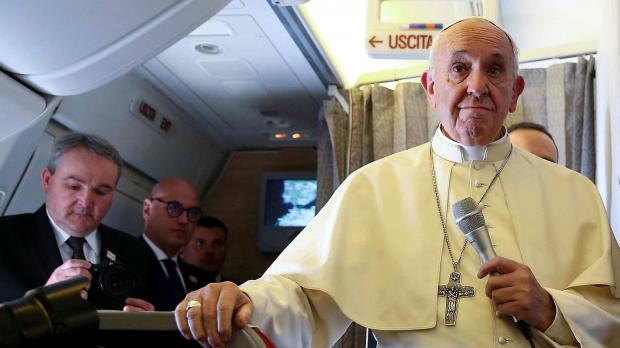 The wedding was not planned. It was an impromptu ceremony and having the POPE to marry the couple was just divine.

The Papal plane was flying over Chile, and the Vatican officials were all very happy that this had occured in the lifes of the flight attendants.

HOW DID IT HAPPEN?

The two flight attendants Paula and Carlos began chatting with the pontiff when they were seated in a group photoshoot. The pontiff then happened to tell the pope about the couple who suffered a Chilean Earthquake in 2010 and had their wedding event destroyed.

The couple then never had a ceremonial wedding from then. The POPE Francis was touched by their story and offered to bless the couple.

The got rings ready, and the CEO of the airline offered to be a witness to this great occasion. As the ceremony was on going the POPE asked the Cardinal Bishops to draft a cedding certificate for the couple.

The POPE then Bless the wedding, handed them a signed wedding certifcate and also said that ” This is the sacrament that is missing in the world, the sacrament of marriage. I hope this motivates couples aorund the world to marry.”

The new weded couple were full of smiles for such a remarkable ocassion.

[SAD] Man loses life during an underwater proposal to his girlfriend

[VIDEO] My name is Suli Breaks

Burna Boy To Win A Grammy

It’s the crazy ones that change the world

Shatta Wale ” If I reply SARKODIE, His mother will come...